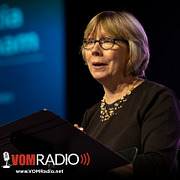 Tessie DeVore leads The Lumo Project, which has been called “The Gospels for a Visual Age.” Listen to hear the story of bringing the pages of Matthew, Mark, Luke and John—word-for-word, right from the text—to film in a way that brings the stories to life in a new way. She’ll also share how these films can be easily translated and produced for multiple languages—including the languages of restricted and hostile nations.

Tessie will describe the power of people seeing Jesus on the screen as they hear the words from the Scriptures, and the process of translating and releasing the films in multiple languages. You’ll also hear a story of how the film is making an impact on one family living in a hostile nation.

Learn more about Lumo Project on its web site, and see samples from the movies on the Lumo Project YouTube channel.