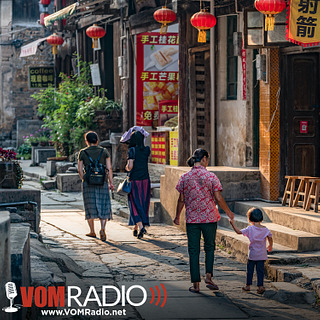 Just a few days before government-mandated “celebrations” of the 100th Anniversary of the Chinese Communist Party, we finish a conversation with Bob Fu, former prisoner for Christ and the founder of China Aid Association. Bob points out the terrible cost of decades of control in China by a philosophy that places zero value on human life.

Bob will talk about the choice some Chinese Christians are making to stay in their country in spite of the constant threat of persecution. He’ll also tell how some Christians are choosing to leave, seeing no future under President Xi Jinping.

China’s pressure and persecution efforts also reach outside their borders—including harassing Bob and his family in the United States.

Bob will help us pray for Christians in China; he also says Chinese Christians are praying right now for the United States and believers here.

Bob Fu is the author of two books: God’s Double Agent, which tells the story of Bob’s coming to faith in China and eventually being forced to flee the country; and The Politics of Inclusive Pluralism: A Proposed Foundation for Religious Freedom in a Post-Communist, Democratic China. You can listen to the first part of our conversation with Bob here.

This month you can receive a free copy of When Faith is Forbidden, the new book by VOM Radio host Todd Nettleton, when you make any donation to help persecuted Christians through The Voice of the Martyrs. Learn more and give online.