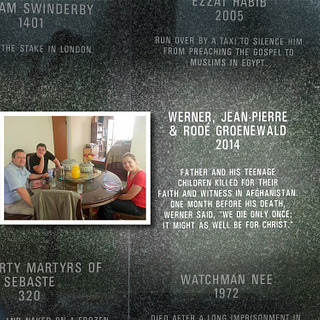 In the second half of this conversation, Hannelie Groenewald recalls the day her husband and two teen-aged children were killed by the Taliban in Afghanistan.

The names of Werner, Rodé and Jean-Pierre Groenewald will be unveiled on the Martyrs Memorial in Bartlesville, Oklahoma on Saturday, June 29 as a part of the commemoration of Day of the Christian Martyr, 2019.

In this interview, recorded in 2016, Hannelie recalls the Psalm she read over and over again as she waited to hear whether her family members were alive or dead, and the amazement of Afghans at her ability to forgive the Taliban which had murdered her entire family. She’ll also describe the blessing of knowing that Christians around the world were praying for her as she grieved—and the hope she has because of God’s promise of eternity in heaven.

Hannelie shares hard-earned truth with listeners who may be struggling to forgive someone who has wronged them, and her thoughts on working through fear with God’s help. She’ll also equip us to pray more effectively for the nation of Afghanistan and for our Christian brothers and sisters there.

You can watch the induction ceremony for Werner, Jean-Pierre and Rodé Groenewald onto the Martyrs Memorial by going to www.Persecution.com/martyr. The event will also be available through Facebook Live on the VOM Facebook page.

Listen to Part 1 of the conversation here.