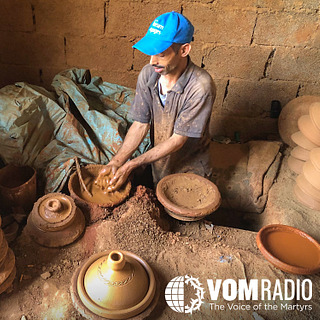 Cade Jefferson was called to missions as a young adult. Soon after college, he went to one of the most restricted countries in the world: Afghanistan. Despite difficult images he still carries from that war-torn nation, etched in Cade’s heart are memories of fellowship with believers who welcomed Cade and his wife with warm hospitality.

After leaving Afghanistan, Cade went to North Africa to serve the Lord, service that turned out to be more difficult than he expected. Cade says he was at a very difficult point, mentally and emotionally, when God was merciful to open doors for him to serve with The Voice of the Martyrs. Sean Paton, who was part of opening those doors, had been a pastor at the church that first sent Cade to the mission field many years before. Today, Cade has stepped into a leadership role overseeing VOM’s work serving persecuted Christians in North and East Africa.

Listen to hear the story of a young teenager in North Africa, Nathan, who exemplifies what often happens when a person there chooses to follow Christ. In North African culture, everything is tied to family. Family connections provide home, education opportunities, career openings and even daily needs like food. When a Moroccan, Libyan, Tunisian, or Algerian person accepts Christ, that new Christian is cut off from those privileges. Yet brothers and sisters like Nathan persevere, in spite of persecution, because Jesus is everything to them.

Cade will also equip listeners to pray. Pray for gospel workers who live in North and East Africa to trust in the Lord to provide for the overwhelming needs of our brothers and sisters. Ask God to encourage and uplift their spiritual health, so they may flourish. Pray they will continue to reach out with the love of Christ to Muslims in their communities, in spite of difficulties.