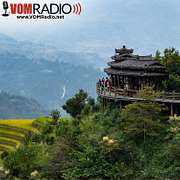 Early in 2017, Pastor Raymond Koh was abducted off the streets of Malaysia—a military-style operation that took less than 40 seconds. He hasn’t been seen or heard from since.

Since our first VOM Radio conversation with Raymond’s wife, Susanna (listen here), the Human Rights Commission of Malaysia issued a formal report on Pastor Raymond’s disappearance. Susanna will give us an update on what that report said.

Raymond and Susanna’s daughter, Esther, will tell the story of the day she found out her dad had been taken, and what she misses most since his forced disappearance. She’ll also talk about the amazing way God prepared and strengthened her mom to go through this season of suffering.

September marks the five-year anniversary of the launch of VOM Radio, and all this month we’re sharing highlights of the amazing stories God has allowed VOM Radio to tell over the past five years. This week’s clip features the story of an ISIS trainer who wanted to find a copy of the Bible. You can hear that entire episode, featuring a conversation with a gospel worker in the Middle East we called “Julian,” by clicking here.