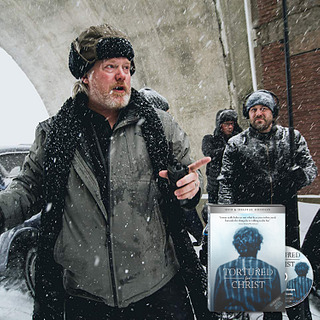 John Grooters directed Tortured For Christ – The Movie, a feature-film telling the amazing story of VOM’s founders, Richard and Sabina Wurmbrand. The story has inspired millions of Christians over the past 50 years through Pastor Wurmbrand’s best-selling book, Tortured For Christ.

Listen as John talks about turning this iconic book into a film, including the challenge of portraying Richard’s suffering in an appropriate way. John will also share how God’s hand was on the production, including snowfall and sunshine in Romania that miraculously cooperated with the filming schedule.

Hear how God led John to just the right song for the close of the film—a song written by a Christian cellmate of Richard Wurmbrand in prison! You’ll hear how Richard’s faith impacted John as he studied the story and created the film, and how he hopes it will also impact the faith of the viewers, including ending the movie not with a scene of suffering but a scene of American Christians worshipping the Lord.

US Residents: as a THANK YOU for your generous donation in the month of March to support VOM's work assisting persecuted Christians, VOM will send you a complimentary copy of Tortured For Christ - The Movie on DVD. You can give online here.

VOM Radio host, Todd Nettleton, has also been a guest on John’s podcast, “No Shame,” which is available wherever you listen to podcasts. You can hear the interview with Todd by clicking here.