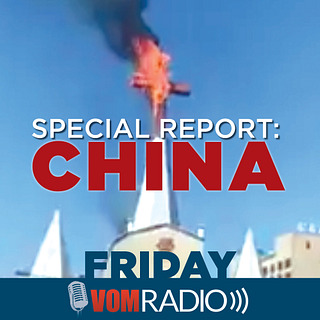 Today we conclude China Week on VOM Radio. All week we've looked at the increasing persecution of Christians in China in conjunction with a new VOM Special Report on China.

Today: “Sister Amber” shares her story of being arrested and persecuted at the hands of Chinese officials in Tibet. It’s one of the most impactful conversations we’ve ever shared on VOM Radio.

Sister Amber spent more than a decade in Tibet, providing vocational training to the people and sharing the gospel message of Christ’s love. She felt God's call especially to work among Tibet's nomadic tribal people, who jokingly call themselves "the roof on the roof of the world." Amber watched as God brought about a great ministry breakthrough: people who'd been totally closed to her message were now asking to learn more about Jesus.

But just days after the breakthrough Amber experienced persecution; police came pounding on her door.

Listen as she tells the story. You'll hear how God ministered to her in the hardest moments of her suffering. You'll hear how she was eventually released, and the way God showed her that her persecution was not the end of the story.

You'll also hear how God laid on the hearts of people around the world to pray for Amber, including one who drew a picture of Amber surrounded by policemen in the interrogation room. Months later, when Amber saw the picture, it matched exactly the setting of her interrogation, but also offered a ray of spiritual hope.

Your faith will be challenged as you hear Amber's thoughts on what the New Testament calls the "honor" of being persecuted, and she’ll give first-hand advice on how we can pray for Christians in prison right now.

If you did not yet receive a copy of VOM’s Special Report on the increase of persecution in China, request your copy at www.VOMRadio.net/China.