IRAN: The Honor of Being Tortured 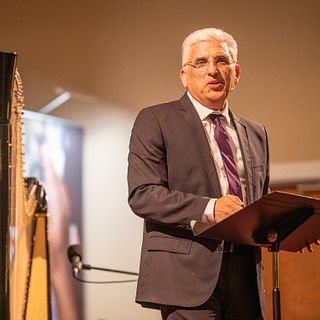 What questions would you expect from a Christian suffering in prison for their faith? When Dr. Hormoz Shariat from Iran Alive Ministries received a call from an imprisoned church leader in Iran, he expected hard questions about suffering and why God would allow it.

Instead, the Iranian man simply encouraged Hormoz. Imprisonment, and even torture, were an honor, this brother said, because he was suffering for Christ.

Persecution of Christians in Iran—especially converts from Islam—is different from other places. In most Islamic nations, persecution starts with the convert’s own family. But in Iran, Pastor Hormoz says, most people—including Muslims—have a favorable view of Christianity, and don’t take offense at family members following Christ.

Persecution in Iran is real, though, coming from the Islamic government that knows it has lost the hearts of the people—and is turning to violence to maintain power and control.

Listen and be encouraged by how the church in Iran is growing, with specific stories of Iranians who have left Islam behind to follow Jesus Christ. The challenge now, Hormoz tells us, is not evangelism. The challenge is to disciple the many new Christians in Iran and help them mature in their faith. He will share how Iran Alive is creating resources specifically for the Persian church. Finally, Hormoz will help us pray specifically for Christians inside Iran—and for government leaders as well.

You can connect directly with Iran Alive ministries by texting “Iran” to 74784.