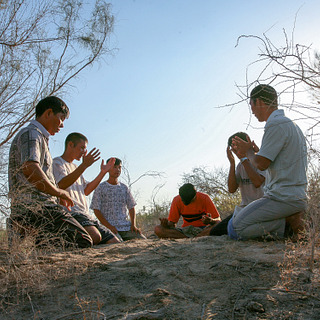 What do our brothers and sisters in Central Asia face in walking out their faith in Christ? A hard path filled with loss and persecution—but also a path filled with joy! Aaron Miller oversees VOM’s work there, and he’s just back from meeting with and hearing the testimonies of our persecuted family there about how God’s Kingdom is advancing even in small steps, one conversation or one taxi ride at a time.

Listen to hear specific types of persecution that Christians in Central Asia face, and ways VOM is standing with them—and in some cases has stood with them for years.

You’ll meet Rebekah, whose husband was martyred for his faith years ago, and who now says that the hard path of losing her husband has opened the door for even greater ministry in her nation—especially to women who’ve experienced loss and hardship.

One of those Rebekah is ministering to is Rachel. Listen to hear why getting a driver’s license was a major accomplishment for Rachel—and how it is already improving her, and Rebekah’s, ability to minister for Christ.

Lydia is the widow of a pastor. Her family is trying to get her to marry a Muslim man. it's an offer she has repeatedly refused, even though in her culture it is very difficult for a single mother. Listen to hear specific ways you can pray for Lydia and her children—and what the support of Christians around the world has meant to her.

Hear the story of a second-grade boy boldly sharing about Jesus with classmates and friends—even though he lives in a restricted nation where such talk can lead to trouble.

You’ll hear about Caleb, who was so convicted after he came to faith in Christ that it changed the way he did his work—which ultimately cost him his job as a policeman. Listen to hear how God continues to meet his family’s needs, and how God let VOM play a role in their story—at exactly the right time.

Your faith will be encouraged and you’ll be equipped to pray for our brothers and sisters in Central Asia this week on VOM Radio.