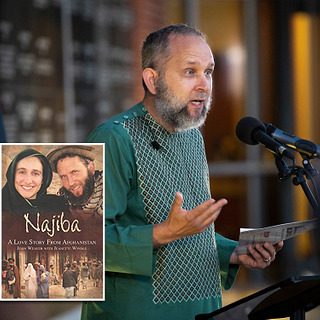 God called John Weaver to Afghanistan as a single man, and he stayed in the country even after 9/11 when the U.S. government encouraged all Americans to leave. John committed his singleness to God, making peace with the fact that he might never get married while living and working in an isolated village in Afghanistan.

It was only weeks after making that commitment that John met Jeanne—an American woman born in Kabul whom God had brought from half a world away to be John’s bride.

Listen to the story of their amazing romance, which is also told in a new book called Najiba: A Love Story from Afghanistan (affiliate link). You’ll hear how they courted and married according to Afghan traditions, honoring the culture in which they served while still shining as a lighthouse for Christ and for God’s amazing blessing that is Christian marriage.

John will also demonstrate specific ways we can pray for Afghanistan.

John has shared previously on VOM Radio. Listen to Part 1 and Part 2 of that conversation. John was also part of the 2019 Martyrs Memorial induction ceremony, which you can watch online here.